Statement of Problem: TMJ disorder is counted as one of the most problem in dentistry treatment with high prevalence. This disorder causes to pain. Since all of the structural defects do  not lead to pain, therefore in differential diagnosis of TMD, the signs and symptoms should be  considered. Purpose: The purpose of this study is to inspect the effect of mandibular advancement on signs and symptoms of the temporomandibular joint disorders (TMDs). Because of various etiologies of TMJ disorder, the researchers have not reached to agreement yet about the effect of orthognathic surgery on TMJ. Materials and Methods: A prospective descriptive trail of 81 patients with the range age  between 19 and 31 years old with skeletal Cl II malocclusion that undergoes orthognathic surgery  is carried out. For this purpose, the numbers of the male and female were considered to be 26 (32.1%) and 55 (67.9%). The most common features of TMDs are including pain, limitation of mandibular movement and joint sound which are assessed at three times pre surgery, three and six months post surgery. Result: The incidence of TMDs at these three times is statistically analyzed by McNemar test. It is noteworthy that 11.1 % of the patients had TMJ pain pre surgery which changed to 2.5 % in duration of three months and 7.4 % after six months post surgery. The obtained results show that incidence of TMJ pain is greatly reduced at three months post surgery in comparison with pre surgery results (p=0.02). In addition, the average of maximum mouth opening is reported as 47.6, 32.4 and 40.1 (mm) before surgery, three and six months afterwards (significant difference). Click disorder is reported 34.6% before surgery and 12.3% three months and 23.5% six months after surgery which demonstrates the remarkable reduction at time of three months later (p=0.0001) and six months after (p=0.004) in comparison with pre surgery. Conclusion: This study is also illustrated that although orthognathic surgery has no significantly effect on the limitation of maximum mouth opening, it causes to improve the TMJ pain and temporomandibular click of patients with skeletal Cl II malocclusion. 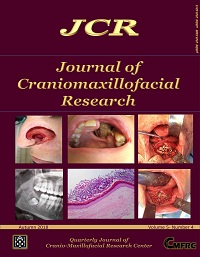